Yesterday as the wind died down I took the A-Quad Ghost with its newly modified bridle for a quick spin. And now we're talking!
Explore more
Loads of Photos from the NKM and the BWF!
The 25th Nordic Kite Meeting!
Early Morning KAP’ing!
Hardcore Freestyle Workout!
I Found a New Place to Play!
All Team Flying Videos in One Playlist

You might remember that some time ago I wrote a few posts about the A-Quad Ghost of mine not being quite satisfied with its flight characteristics. I did a few tweaks trying to remedy this, but none of them turned out successful.

One of these tweaks was to soften the LE a little, hoping the kite would get a slightly better “grip” on the wind. But this somewhat softer LE didn’t make any significant improvements to the kite.

I also tried to fiddle with its bridle, yes, I even tried to fly it bridleless, attaching the flying lines to the frame only, but without any success.

So the Ghost has stayed in the bag for a while. But a few weeks ago, when I was in Gothenburg with Anders and Kjetil, we brought it out in the daylight again and took another look at the bridle. Anders did a few measures and did some tweaks to improve the kite’s balance. Unfortunately, the winds were way above the Ghost’s upper range that weekend and have been ever since. Until yesterday!

So late yesterday evening, just before sunset, I took the Ghost for a spin down on the beach. The wind was about 1 meter per second (2 – 2,5 mph) which should be pretty close to perfect for this kite. But based on my prior experiences with the Ghost, my version of it, would barely fly under these conditions. Not enough oomph to get it up there.

But what would it be like now, with its modified bridle?

I set it all up for the flight and pulled in the front lines to launch the kite. And I felt it immediately! The kite grasped the light whisper of a breeze and converted it to lifting power and the kite flew straight up to the top of the wind window!

Now, this was more like it! Even in the very light winds, the Ghost was flyable without me having to run my socks off to keep it up there! When pulling on the front lines, the kite reacted and accelerated rather than flutter and not much more actually, like previously.

The steering was quite crisp too, well, as crisp as it might get in these very light winds. It’s more like you’re guiding the kite around up there rather than flying it and now it really feels like I’m in control of things!

Unfortunately, I was a bit short of time and space so I didn’t get to fly the Ghost for more than fifteen minutes or so, but despite the limited flight time, it was clear that the bridle mods surely had improved the kite’s characteristics!

Stay tuned for more on the Ghost soon! 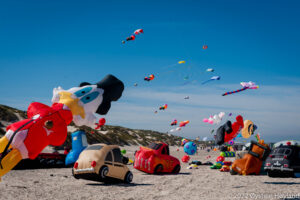 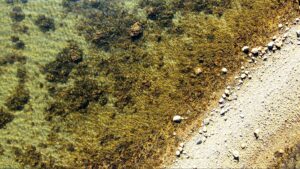 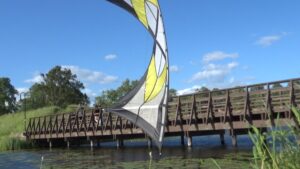